Dr. Michael Evans is a dentist at Southgate Surgical Suites in Lethbridge, Alberta. 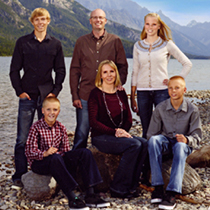 Michael was born and raised in Lethbridge and attended high school at Lethbridge Collegiate Institute graduating in 1990. He served a two year mission for his church in the West Indies from 1991 - 1993.

Michael married Leigh Ann in 1994 and are the proud parents of four children: Julie, Tyler, John and Ryan. Michael enjoys spending time with his family as well as coaching their football and basketball teams throughout the year. The family especially enjoys spending time in Montana skiing in the winter and boating in the summer months.

« Go Back to Our Doctors